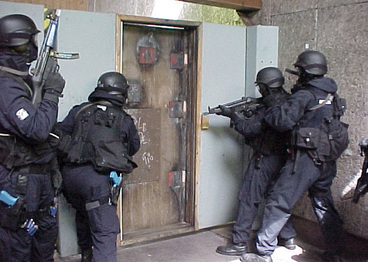 Close Quarter Engagement Training is known by various names or descriptions including, CQB, FIBUA, MOUT, etc.  Militec provides a realistic training package that is easy to set-up and program.

The MATRIX Training System has been specifically developed to provide the user with an easy method of creating and storing firearms training scenarios for use at close quarter in urban and built up environments. The software utilises a grid system with pull down menus so that settings are easily selected. Up to 50 targets can be programmed using the software and all of the Militec target systems are catered for.

Below is an example of what a typical training package may contain, the quantities and types of mechanisms will vary according to each particular shooting range and desired scenario

The AC310 Sound Distraction Unit.  These may be linked to a target mechanism or used as a stand alone unit 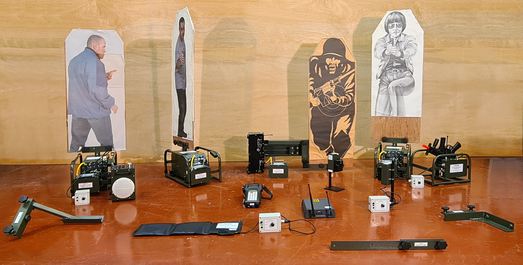 
When using the Close Quarter Engagement Training Software a scenario can be created where the target movements are initiated by the actions of the trainees as they advance through the range.  Examples of initiators could be opening a door, breaking an infra-red beam, shining a torch into a room or the shooting of a target.


The system allows the target mechanism to be activated from:
The computer or range controller.
Trigger devices such as pressure mats, PIR sensors, etc.
A radio message sent from another target as it is being triggered, as it turns to a hostile or friendly exposure, as it is hit or as it falls.


A distraction device can be activated from:
Trigger devices such as pressure mats, PIR sensors, etc.
A target mechanism, as it is being triggered, as it turns to a hostile or friendly exposure as it is hit and as it falls.
The setting up and changing of a range layout is easily achievable as communication between the target mechanisms and the trigger devices are via radio thus eliminating the need for trailing cables.